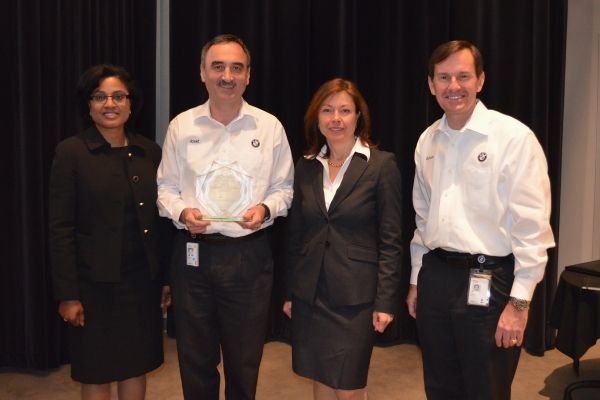 For its individual efforts in energy efficiency throughout 5 major expansions since 1992, sustainability and business growth, BMW Manufacturing was a recipient of the 2012 Duke Energy Power Partner Award.

"We deeply respect BMW's commitment to sustainability and their innovative approach to responsible energy use," said Gayle Lanier, Duke Energy senior vice president and Chief Customer Officer. "The energy they are saving is powering other homes and businesses in the community, which helps delay the need for new power plants and supports our goal of delivering increasingly clean energy for our customers."

For a decade, BMW manufacturing has reduced CO2 emissions by 92,000 tons per year. To date, the landfill gas-to-energy project has saved BMW an annual average of $7 million in energy costs.

In 2012, the company announced that they had added solar to their suite of alternative energy. Installation of 400 solar modules, each capable of producing 240 watts of energy, now provides power to the Zentrum Museum making the facility carbon neutral. In addition, the solar panels provide energy to three electric vehicle (EV) charging stations. Also, in 2012, the plant achieved a major milestone. With the exception of one regulated waste stream, BMW's plant in South Carolina claims a Zero Waste-to-Landfill status.