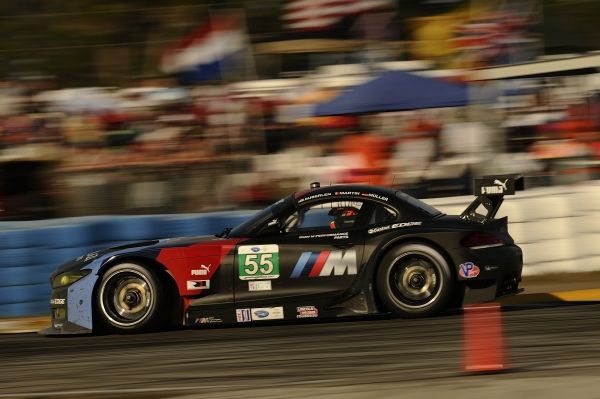 For more than eight hours a top result was in reach for BMW Team RLL at the American Le Mans Series (ALMS) season opener at the "Sebring International Raceway" (US). While in the end technical problems in the final third of the race denied Bobby Rahal's (US) squad a shot at a possible podium finish, BMW Motorsport was able to draw a positive conclusion after the race debut of the newly developed BMW Z4 GTE. The two cars showed a promising pace, finishing fourth and seventh in the GT category after 12 hours.

Bill Auberlen (US), Maxime Martin (BE) and Jörg Müller (DE) were able to battle it out at the front of the field with the Frozen Black No. 55 BMW Z4 GTE for most of the endurance classic, before the trio lost time and positions due to an issue with the power steering. After 330 laps, final-stint driver Müller crossed the line in fourth. The No. 56 BMW Z4 GTE, driven by Dirk Müller (DE), Joey Hand (US) and John Edwards (US), delivered an equally strong race, even leading for several kilometres in the BMW Z4 GTE's maiden ALMS race. However, a problem with the front left strut with three and a half hours to go made repair work necessary. Dirk Müller lost many positions, dropping down from second. Hand ultimately took the chequered flag in seventh. Corvette's Oliver Gavin (GB), Tommy Milner (US) and Richard Westbrook (GB) claimed victory in the GT class.

BMW Motorsport and BMW Team RLL, nevertheless, had every reason to be satisfied with the first outing of the BMW Z4 GTE in race conditions - on one of North America's most challenging circuits. All six drivers, including the series newcomers Martin and Edwards, were able to record competitive lap times with the new car and challenge the strong competition at the front of the GT pack. In addition, the engineers collected valuable insights over the course of the weekend, which will now be used for further development the car and getting it prepared for the second ALMS race at Long Beach (US) on 20th April.
For the first time since 2010, BMW Team RLL had to cede GT victory at this 12-hour race to another team. The team had triumphed in both 2011 and 2012 with the BMW M3 GT at this event. Overall, BMW has scored four class wins in Sebring. On top of this, the BMW 3.0 CSL scored overall victory in 1975, as did the BMW V12 LMR prototype in 1999.

"We didn't necessarily expect to be able to set our sights on top positions with the new BMW Z4 GTE in the GT class of the American Le Mans Series from the word go. The lap times and the consistency of our drivers was promising, both cars were able to fight among the front-runners in the first two thirds of the race. Unfortunately they lost ground due to technical gremlins. However, it hardly comes as a surprise that such problems can occur on a car that hasn't completed too many kilometres of testing. In any case, BMW Team RLL and the BMW Motorsport crew proved their fighting spirit until the very end and delivered a good performance. The BMW Z4 GTE proved its potential, and that's what we had all hoped for. In addition we saw just how strong our driver line-up is. All six of them were running really well. Now we will draw the right conclusions from this race and are looking forward to our second ALMS outing in Long Beach. It's all about getting closer to the limit of the BMW Z4 GTE on a race by race basis, and today we have taken the first step."

"Sebring usually puts the biggest demands on the cars, and that's what we also saw today. This race was a true test for our new car. Obviously there are still some issues that we need to sort out. But when the car was out on the track, it ran competitively. So that gives us a lot of optimism for the future. We were in a good position to do well in this race, but a better result just couldn't be. We will be ready for the next race."

"I think everyone is surprised about how good it went for us overall here in Sebring. BMW Motorsport once more came up with a competitive car from the word go. Of course we need to improve in certain areas, but anything else would come as a big surprise. The whole team did a great job, never gave up and really deserved this fourth place finish."

"This has been a very exciting weekend for me. I really enjoyed my first ALMS appearance and instantly felt at home at BMW Team RLL. Fourth is a good result to start with. Maybe we could have scored an even better result under normal circumstances."

"During my first stint I hit another car with the front of our BMW Z4 GTE, which had a negative effect on the balance. With every pit stop we managed to improve the situation more. For many hours the car went like clockwork and we were able to push really hard. Finishing fourth is quite okay considering the problems we had."

"Obviously it's a bit of a pity we dropped back in the final stages of the race. However, things like that just happen at the debut of a brand new car. However, I walk away from Sebring with many positive thoughts in my mind. I'm really happy that the new season is finally underway, and the BMW Z4 GTE makes me really look forward to the next races. Of course there's still a lot of work to do, but the basis is definitely good."

"This has been a decent debut for our BMW Z4 GTE. We could really feel in the cockpit how 'racy' this car is. We gained a lot of experience, not just regarding the car, but also regarding our new Michelin tyres. After our victories in the past finishing seventh feels a bit unfamiliar. But I'm sure the BMW Z4 GTE has got everything that is needed to be back at the front really soon."

"It's been just a great feeling to race this unbelievable car here in Sebring. I managed to find a nice rhythm, and the BMW Z4 GTE really made life easy for me. I'm happy that I slotted in well in this new environment. The engineers and my team-mates helped me in a sensational way. Experience is just such an important factor at this track. Normally we could have challenged for a better result. Still we should be happy with this promising debut."
M