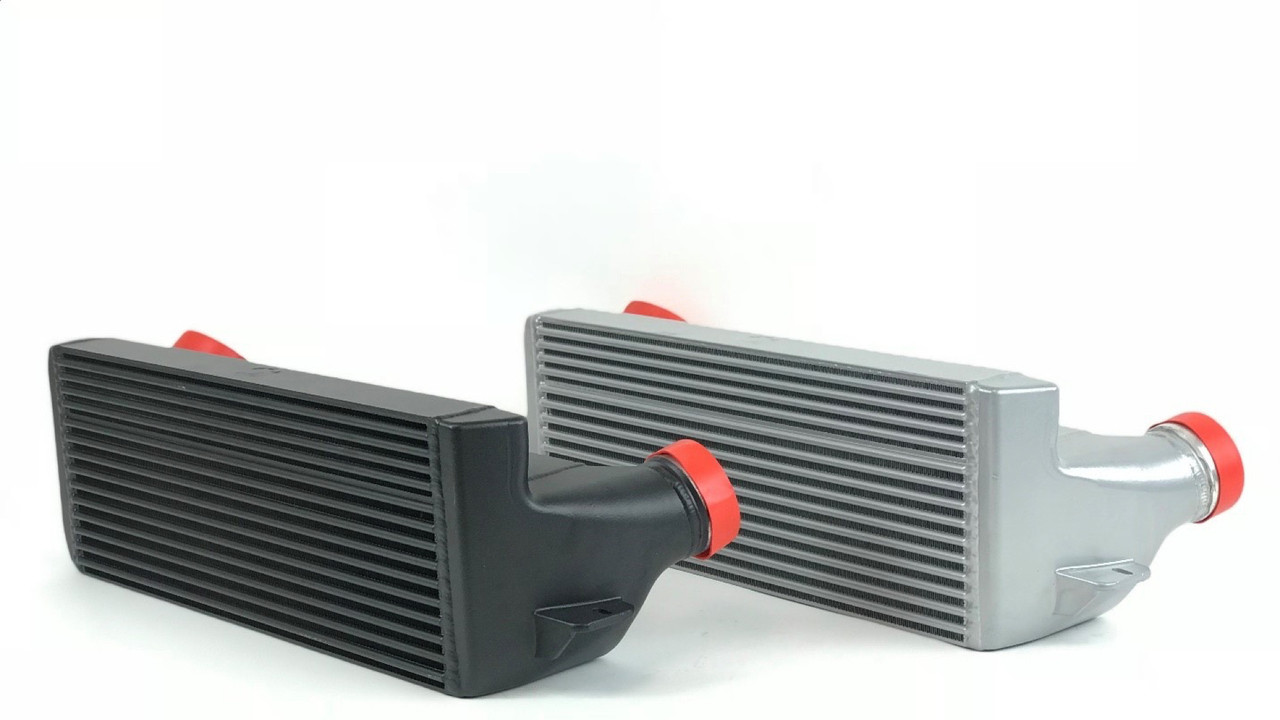 It’s about damn time!” That’s what the industry shouted back when they found out that CSF would finally be releasing a high-performance BMW N54 intercooler. Late to the party considering the platform is now over ten years old, but after the overwhelming success of the CSF’s newer BMW n55 intercooler, CSF had to answer the call and supply an industry leading design to address all the shortcomings of not just the OEM unit, but also other aftermarket intercoolers. 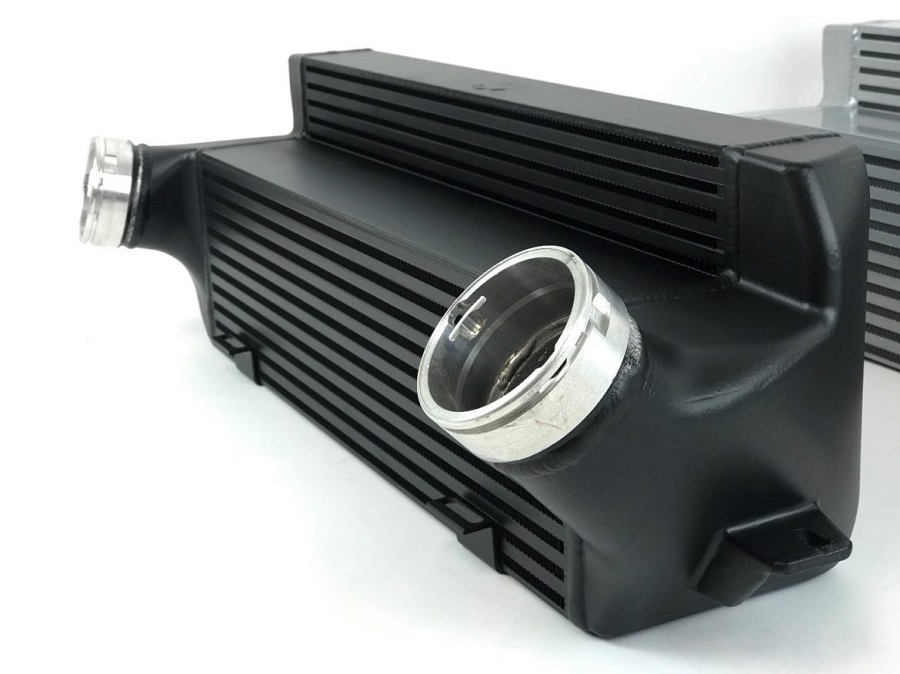 The BMW N54 engine has become known as one of the best built, most reliable engines in the world, especially from a high performance tuning standpoint. Many owners are now pushing well over 500hp out of these motors, some getting in the 700’s on big single turbo set ups, and a few now inching near or over the 1000hp mark! Truly amazing performance can be achieved when using the proper components from quality high performance companies, including needing a worthy high performance intercooler to handle the increased Intake Air Temperatures (IAT’s) generated from more power and higher boost pressures associated with these built vehicles.

CSF VS OEM
Is it time to replace your OEM intercooler?
The weak plastic endcaps can become weak & brittle over time with repeated heat cycle use and normal wear. Keep in mind the model range of 2004-2013 so the original OEM intercooler can be anywhere from 5 to almost 15 years old at the time of writing this article.
The OEM style tube/fin core has many performance limitations (keep reading below), and may also become full of debris from typical road use effecting performance of an already limited intercooler. Also, being mounted in the front fascia of the vehicle, small rock chips or debris may cause small punctures in the tubes of the core, causing small boost leaks which users may not realize, further reducing intercooler performance.
The direct injection system of the N54 engine causes massive amounts of oil build up in the charge piping, intercooler, and intake manifold. This further reduces the performance of the intercooler.
Before purchasing another OEM replacement intercooler for ~$530USD, potential buyers should realize that there is a much better alternative (at an even better price point!) with CSF’s new BMW N54 intercooler. 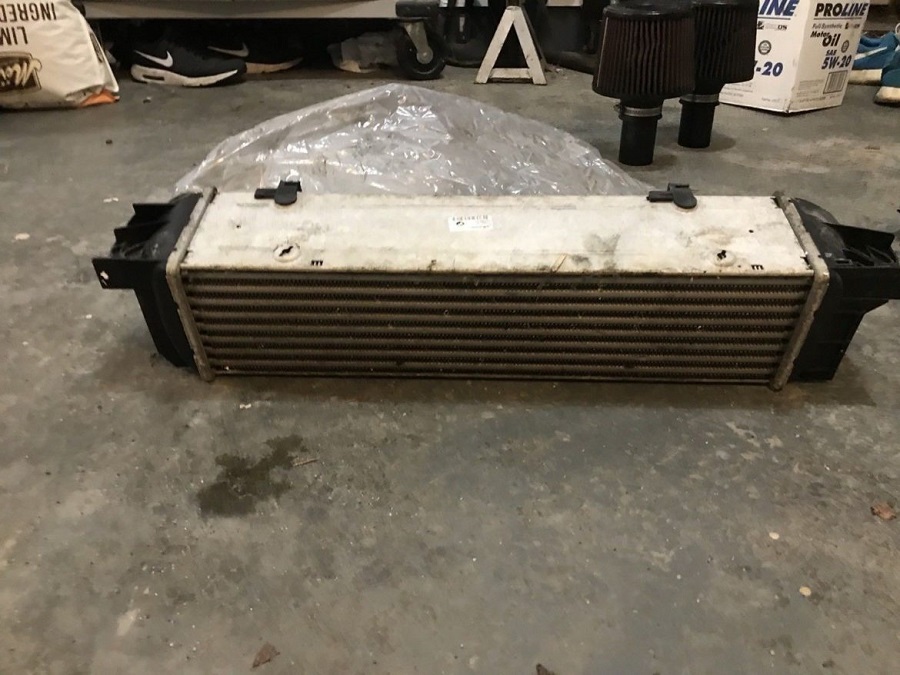 Intercooler Design
The OEM intercooler is made from plastic end tanks that are crimped on to an aluminum tube/fin core that is ~4 inches thick (105mm core width) and is 5 inches in height (127mm). This may be enough to keep IAT’s in check on a completely unmodified / stock vehicle, but once users to start increase power through bolt-on modifications, tuning, and built engines, the OEM intercooler will become the Achilles heel of the system with IAT’s skyrocketing out of the optimal range and drastically lowering the performance capabilities of the vehicle.
Enter CSF with their new, stepped core design, bar/plate high performance BMW n54 intercooler. This “drop-in fit” intercooler, which requires no modifications to install, has a bottom / larger section that is 5.5 inches thick (140mm) with a front face that is massive ~8.25 inches tall (210mm). A huge improvement over the OEM unit, and enough to handle even the most advanced n54 engine builds. Good for 1000hp no problem!

Core
The OEM, and some higher-price aftermarket units, are made out of a tube/fin style core. While lightweight, this type of core is prone to heat soaking under high boost levels and prolonged use. Also, the core is susceptible to bursting (or bulging) due to increased boost levels as tube/fin cores can not take the higher boost pressures of a high performance system.
CSF’s new BMW N54 intercooler is made from it’s industry exclusive rounded bar/plate core design. The rounded front face of the cooling bars allows for better airflow into the core. Airflow hits the core surface, and rather than scattering like it does with hitting the face of a flat bar that all competing products have, it travels around the face of the round bar and into core for much better performance than both the OEM design (flat face) and all other aftermarket competitors (all have flat face tubes or bars).
CSF has also wind-tunnel tested (in-house) and optimized the size of the core and fin density of the intercooler core to ensure low pressure drop and proper airflow into the rest of the system, including the radiator which is known to be another shortcoming of the cooling system. (Check out CSF’s high performance radiators to complete the ultimate cooling solution – CSF #7045 (manual / #7046 automatic).

With CSF’s high performance bar/plate style core, you never have to worry about spikes in pressure or failure due to higher boost pressures, the CSF intercooler is pressure tested to 120psi!

Endtanks
Compared to the OEM style plastic crimped on end tanks, the CSF unit is vastly improved. The all-aluminum cast end tanks are 100% TIG welded to the high performance core for better durability, reliability, and longevity. The CSF intercooler comes with a lifetime guarantee against manufacturing defects or failure due to normal / intended use.
Just like the OEM design, the CSF intercooler integrates the factory style “Quick-Connect” inlet/outlet fittings. CSF has CNC machined and welded these fittings to the core for perfect factory-level fitment. (new high performance locking spring clip included)

Quality
When purchasing a CSF intercooler, you’re purchasing from a cooling system manufacturer that is an ISO-certified Tier-1 OEM supplier that has designed, built, and tested the entire intercooler in-house. Competitors source their cores from overseas factories, and either weld the coolers themselves (not factory level production), or simply purchase an intercooler from a supplier source. Also, CSF intercoolers are meticulously hand welded by expert TIG welders and finished in a semi-gloss black or silver finish that is much more durable to damage than uncoated intercoolers. Finally, each intercooler is individually packaged with hardware kit, instructions, and CSF logo stencil. 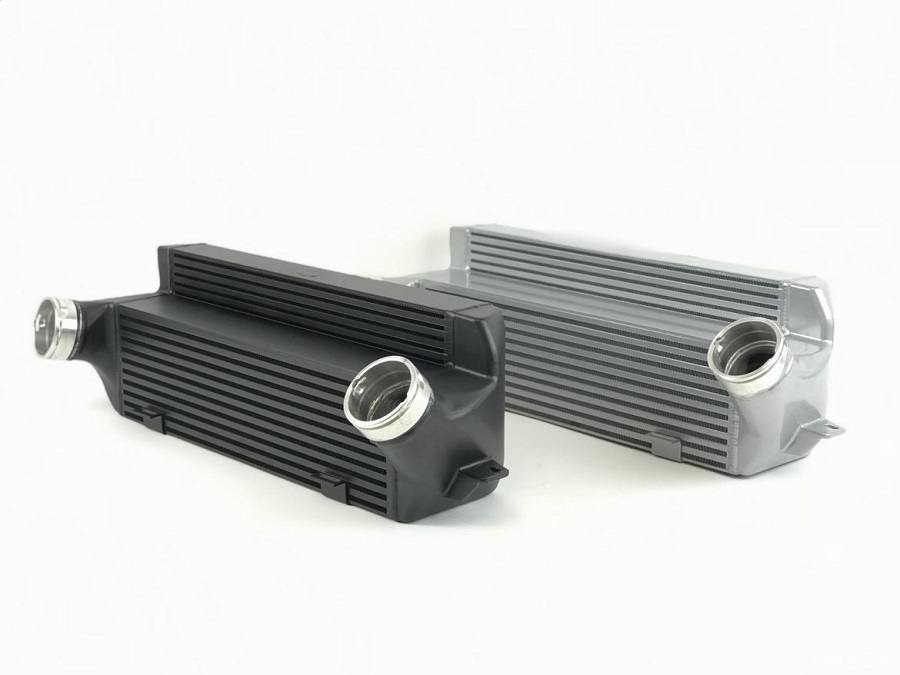 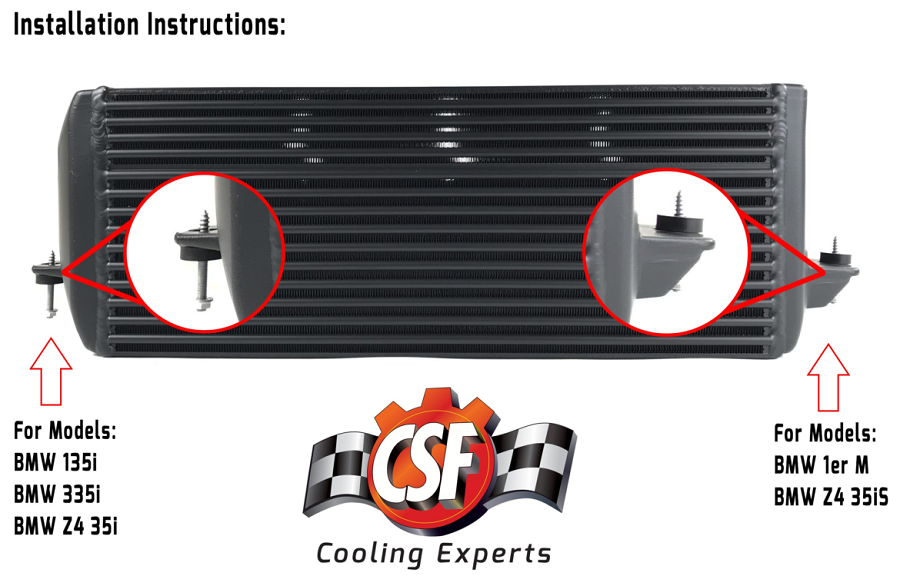