kanar200 said:
I just installed a new set of 20' tires. Below are the specs I got the last time (got min toe 0.04 as the machine indicated this as min ). Generally, handling and wear in the back was good (even). The front was wearing more on the outer edge. What should I correct now? 40-50% mileage currently is towing (heavy rear axle), but I am not sure, if there should be anything to correct for this. Thanks! 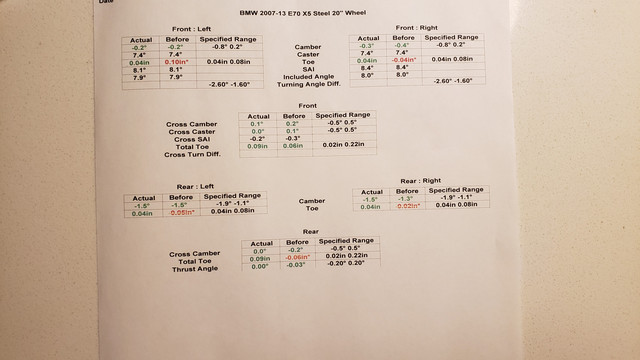 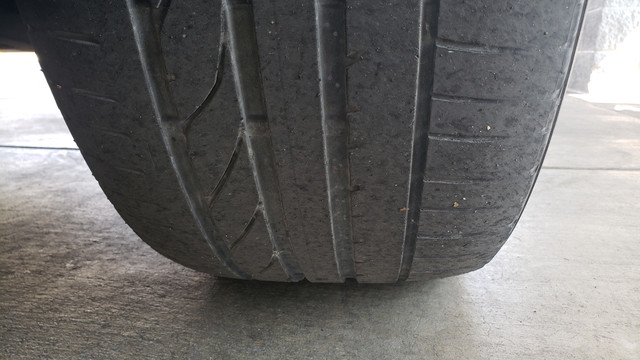 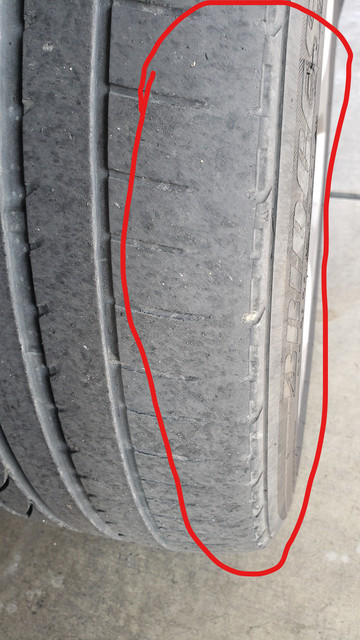 You're inside edge only looks slightly better, indicating this is mostly caused by insufficient tire pressure. Excessive camber tends to wear the tire "conically."

BMW's recommended tire pressures are not those for optimal tire wear. Other considerations are ride quality and the ability of the tire to maintain adhesion to the road when encountering pavement discontinuities. Also, run-flat-tires tend to wear as if under-inflated. That's because the sidewalls can't stretch as much in the circumferential direction as on a non-run-flat radial tire.

Adjusting front camber on BMW's requires replacing the upper control arm or knuckle (on cars with struts), or installing a "camber kit." BMW sells the upper arms and knuckles with standard camber, and also plus or minus one-half degree.

Towing and carrying a lot of weight in the cargo area actually reduces the weight on the front axle.

Frau Putzer's G01 X3 has non-run-flat tires. The recommended pressures are 32 PSI front and 35 PSI rear. At 36 PSI front (measured cold in the early morning) the tires were still wearing as if slightly under-inflated. The rear tires at 39 PSI were wearing as if slightly over-inflated. With tire rotation, they're wearing almost perfectly (average wear of the two middle circumferential channels are equal to the average wear of the two side circumferential channels).

BMW SUV's tend to wear the outsides of the tires more. This is due to a higher center of mass (causing more body roll and concentrating weight on the outer tires in a turn), taller tire sidewalls, and less rear negative camber spec's. BMW passenger cars tend to wear the insides of the tires more. Frau Putzer's X3's tires' outer channels are wearing faster than the inner circumferential channels. Because of the over-inflation, the edges of tires are fine, though.

I bet you had to pull the steering wheel to the left constantly before the alignment. Even then, your total toe-in in the front was just 0.06 (degrees?) or 0.03 (degrees?) per front wheel.

If you have a square set-up, rotating the tires would help greatly. It averages out any uneven wear over all four tires.

Joined Mar 16, 2014
·
14,431 Posts
Caster can't be changed, except with an aftermarket "kit." That's probably why BMW doesn't specify a particular range for caster. No spec' means a car can't be out of spec'. I just got my F10 aligned at the dealer and there's no spec for caster listed on the data sheet I got.
A

Back in pre-historic times alignment was done with rulers. They'd measure toe by measuring the distance between the middle of the tires in the front of the tires and in the back of the tires, as shown in Aardvark's link.

Then convention for not confusing angular minutes and seconds with feet and inches is to always state a value in degrees even if the value is zero. So, a half of a degree would be written as 0° 30'. or 0° 30' 0".

When kanar200 told the alignment tech he wanted 0.02 inches of toe, the tech' thought "WTF? Whatever..." and went on with doing the alignment to whatever the spec's were in his computer. All the values on the screen in kanar200's attachment are in degrees with a decimal point. Some computerized alignment equipment does report angles in degrees-minutes-seconds. BMW's Kinematics Diagnosis System actually mixes how it reports angles: degrees and minutes for toe, and degrees with decimals for camber and caster.

Pretty much the first thing they teach you in engineering school is that "units matter." If you have your units ****ked up, everything's ****ed up. That's why that Air Canada flight ran out of fuel mid-flight (fuel in pounds instead of kilograms), and why NASA's probe to Mars missed the planet (yards instead of meters).

I grew up in Norfolk, Virginia. I lived a few blocks from what is now DRS Automotive, the restoration shop featured in the Motor Trend Channel's show "Fantomworks." DRS would have alignments done at Mizell's Alignment Shop a few blocks away. Mizell's was an old school alignment shop that still used rulers. I had my 1976 VW Rabbit aligned there in the 1970's.
'
1 - 3 of 3 Posts
About this Discussion
218 Replies
48 Participants
Last post:
bimdwg 6 mo ago
BimmerFest BMW Forum
A forum community dedicated to BMW owners and enthusiasts. Come join the discussion about Bimmerfest events, production numbers, programming, performance, modifications, classifieds, troubleshooting, maintenance, and more! Bringing the BMW community together.
Full Forum Listing
Explore Our Forums
E90/E91/E92/E93 (2006 - 2013) E39 (1997 - 2003) E46 (1999 - 2006) E36 (1991 - 1999) E60 / E61 (2004 - 2010)
Recommended Communities